Happy 70th birthday Elsa Schwan!  A much loved friend to many, mother to two, and grandmother of five boys, including wonderful brand-new baby Hugh Tasman.  I have loved my long association with Elsa, both as a colleague and as a friend.  Much laughter, much kindness.  I do have a beautiful new photo - thank you Meriloy - and with a bit of a struggle downloading it from here to there…voila! 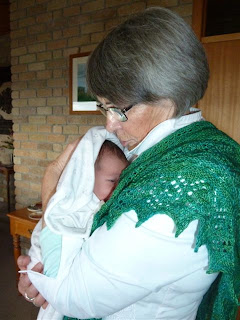 We have just come back from a very pleasant little Mountain Interlude.  Our kind Cairns Friends, Rosemary and John, picked us up yesterday in their big 4WD and took us on a tour around some of the lakes on the Atherton Tableland.  We stopped to admire the Cathedral Fig, and I took a panorama photo INSIDE the tree, almost totally surrounded by roots.  Just beautiful.

We drove through Yungaburra, past the Hotel Eacham, which is a splendid old rambling wooden building, and which looks very inviting.  But…don’t go there, said Rosemary and John.  It is very ineptly run, with random cooks, random service.  They went there recently with a large group of people.  And the food, said Rosemary, was OK, … for those who got a meal at all.  Several meals just didn’t come.  When they asked about this, trying not to get too high-pitched about it all, the manager said, “Never mind, better luck next time,” and strolled off without even offering to heat up a National Pie.

Our picnic lunch was on a deserted farm property called The Chimneys, all very tranquil.  I did a bit of nature study and took a photo of this dear little Willy Wagtail.  I was actually trying to take a photo of some gorgeous little birds which looked very like firetail finches, but they were so very swift and darting in their movements that it was impossible.  Almost impossible even to look at them.  So unless one of them decided to expire neatly on a log, like our Ulysses butterfly in Kuranda, there was no chance at all.  So this less spectacular but more staid bird will do. 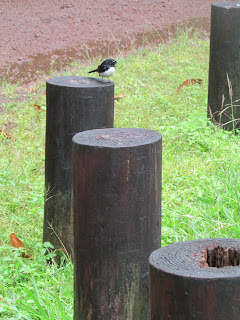 I also wanted to take a photo of magpie geese, which are very beautiful – big, black and white, v speccy.  But when Bill (later that day) took us on a tour of his nephew Billy’s farm, there were about five HUNDRED of these geese, and he was very annoyed with them.  Bloody bastards of things!  They eat all the feed for the cattle!  So I didn’t feel it was the right moment to start snapping admiringly in an Attenborough manner…

We arrived at Bill’s lakeside encampment at about 4.00.  just beautiful, on the banks of Lake Tinaroo.  He has a series of dwellings on his block – an old tin bunkhouse, and on the lake shore, a little kitchen-dining hut, open on three sides, and about three very comfortable tents set up on wooden platforms.

Rosemary and Pete, outside our tent. 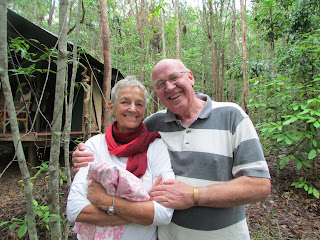 Bill and his wife Geraldine also have a small log house of their own.  It is all very peaceful and beautiful, and reminded me very much of John and Catherine’s place on London Lakes in the Central Highlands (Tas.)  And no not much warmer!!)

Bill took Pete and me, at dusk, to look at Billy’s nearby farm, where he helps out a lot.  All very interesting.  I was very taken with the huge mound of corn silage – it looked and smelled totally delicious and I can see why the cattle on this property – and the magpie geese – are thriving.  I wanted to take some back to 2XS, to eat with a bit of yoghurt and fruit for my breakfast…

Back at the lakeside, I went for a bit of a walk, with my umbrella – it rains A LOT these parts – looking for tree kangaroos.  Apparently there is a mating pair living somewhere near the bunkhouse.  But…they are very shy.  Bill says they are quite rare, mainly because they don’t have any defences.  Their only defence is to drop down out of their tree.  And once on the ground they have no speed or agility.  So, poor darlings, they fall easy prey to dogs.  Better, he says, for them to stay UP in their trees!  He says sometimes he sees them, peering anxiously at him as he drives around in his tractor.  After a while it all gets too stressful and they drop heavily to the ground and lumber around.  Fortunately…he doesn’t have a dog.

(The big round metal thing below is the fabulous fire pot...) 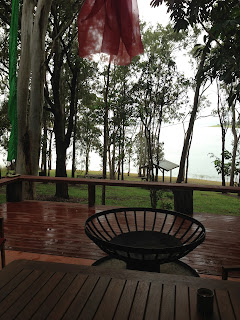 We had such a nice evening, eating pasta, drinking red wine and sitting cosily sheltered, near the fabulous big firepot which blazed away very nicely (after the application of quite a lot of lighter fluid…everything up in this area is damp, including the firewood.) 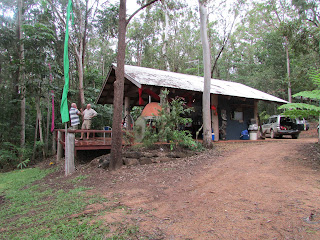 This morning, after a BIG breakfast, Rosemary and John brought us safely back to 2XS.  Pete is having a much-needed rest (I went to bed earlier than he did…and drank less red wine) and I am happily sitting on board, surrounded by many electrical cords leading to computers, printers, battery chargers, the lot.

Here is a bonus photo of John, Pete, Bill, taken the other night at dinner at Kewarra Beach.  These men, AND Rosemary, are a wonderful source of knowledge about sailing up the coast of Northern Australia, as well as being very good,  cheery company. 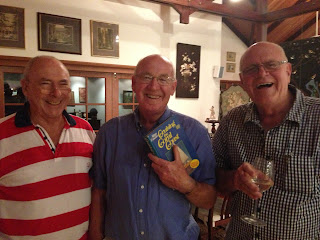