We have leapt from continent to continent and now we are back in Australia.  In hot and sunny Cairns, reunited with 2XS, which has been waiting patiently in Blue Waters marina for the past few months. 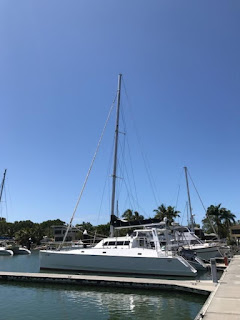 It seemed to take forever to get from Singapore to Cairns.  I didn’t sleep at all and was quite happy sitting trapped in my small seat on the plane because all seven episodes of Big Little Lies was waiting for me on the tiny TV screen, just inches from my nose.  I enjoyed it very much although my eyes were totally gritty after so many hours watch watch watching!

We were just a bit worried about the boat…would it be full of mould??  This does happen, in tropical climates.  But no, the boat is squeaky clean and very dry and ready for us to leap aboard and set sail.

I spent the morning in the supermarket; Pete spent the morning down the hold getting very hot indeed because…the starter motor wouldn’t start.  A bit of a flaw… I don’t know how many hours he spent down there in his hot metal coffin, but he emerged at last, very weary and dehydrated, but – successful!

Yes Townsville…not enough time to catch up with our friends and relations.  We arrived late afternoon and filled up with diesel then anchored outside the marina, ready for an early morning start.


We are speeding down the coast.  I have cooked a large and sustaining dinner and a large veg-filled lasagne for the overnight trip tomorrow.  And we should be in Airlie Beach in time to meet up with my family! 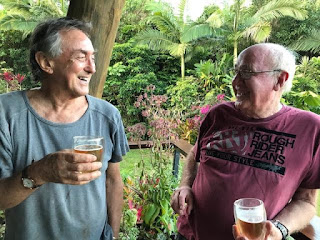 Along the way we had a twelve hour stop at  Mission Beach, where we stayed with Pete and Maddie and beautiful Baggins the Dog for delicious food, wine, chat.


I should write about our day at Gardens by the Bay in Singapore – so impressive, so amazing!

Posted by Marguerite at 02:28 No comments:

This morning I got an email from my cousin Liesbeth, in Harby (Newark, Nottinghamshire) saying that…the weather is disgustingly vile.  So maybe it is good that we are no longer in the UK but in Singapore where the weather is always ALWAYS the same.  Hot and steamy.  Between 30-32 every day.

We were sad to leave the UK, where we had had so much fun, so much love, so much chat, food, wine, adventure!

But really we didn’t have suitable clothes for disgustingly vile weather so…it was definitely time to leave!

I haven’t been able to write any bloggery because…I lost my computer charger.  I was very annoyed with myself; I had tried so hard to check every single power point whenever we left one place for another (which seemed to be just about a daily occurrence…)  Yesterday we went to one of the many (MANY) huge Singapore shopping malls and I bought (sigh, $120,) a new one.  And when I looked at the boxes…I thought, hmmmm…two boxes…my computer charger is a single unit, with the charger cord securely welded into the other bit.  Isn’t it??  Well no…I actually hadn’t lost it alt all, it was still faithfully in its special pouch in my pack, but had separated itself into two bits so that I no longer recognised it.  I no have to make my way back to Vivo, but travel is easy in Singapore, with the super efficient metro system so all is well and I can get my $120 back!  And…I can write my blog!

A lot to catch up on…The 70th birthday party was wonderful.  Only 22 people, mostly family.  And everybody spoke to everybody!

Once again I found it all overwhelming, meeting so many delightful beautiful and charming people closely  related to me.

But lots of new connections and great friendships.  Carel, for instance, took a great liking to Pete.  I just love this photo…Carel is being exuberant in his affection; Pete is being tolerant and amused; Philip is totally impassive.

We had our last two UK days in Windsor with Pete’s wonderful cousin Judith.


I was able to get some photos of "her " horses on a grassy knoll not far from her house.  Judith and some of her gang raised the funds and organised for these horses to be cast for the queens 60th birthday celebration.  The powers that be had already organised a Windsor sculpture for her – a spiral of large stainless steel balls outside Sainsbury’s… I am sure the queen admired them very much but….she does love her horses and these are just beautiful. 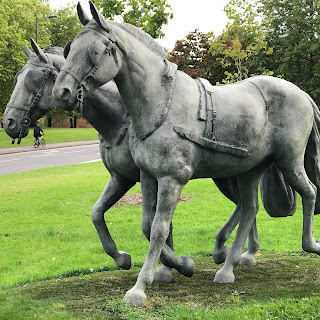 I also fulfilled some other ambitions.  I stalked a squirrel!  And got a beautiful photo of its tail… 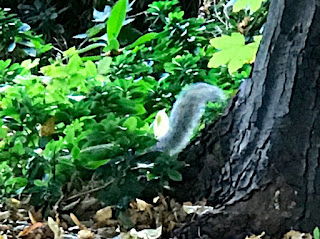 I also found an ugly pub. 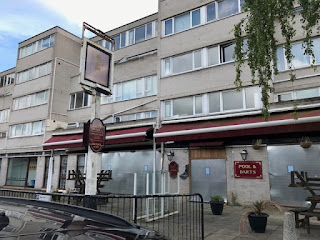 I had until then been convinced that there was no such thing in the UK.  All pubs look like this, or even prettier: 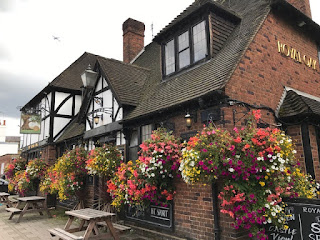 I was beginning to get a big inferiority complex; in Australia we tend to specialise in ugly pubs! 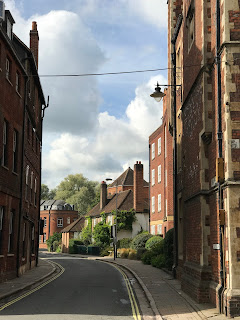 And we went for a walk across the bridge into Eton.  Eton is a very pretty village, mostly occupied by The School.


And yes they do wear tailcoats!  And starched white shirts with white bow ties!


Our 13 hour flight to Singapore went well.  As in…the plane got from Point A to Point B.  we both had aisle seats, and we both had pleasant neighbours who didn’t want to chat.  But oh dear 13 hours sitting all cramped up is just too long!  I am still feeling (and looking…) like a hollow-eyed ghoul… 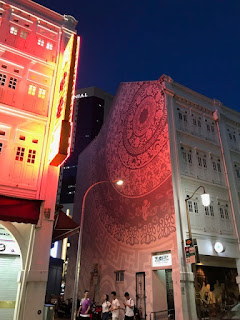 But Singapore is great.

It is all very efficient and very very clean.  Lots to see, lots to do. 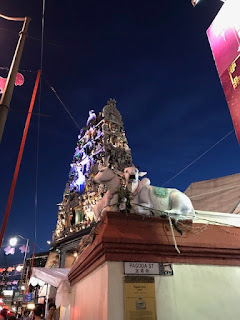 I had a birthday and spent it feeling (and looking) like a zombie. 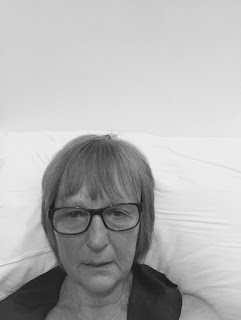 Pete, on  the other hand, looks great!  All colour co-ordinated with his umbrella, shirt and dragonfruit smoothie! 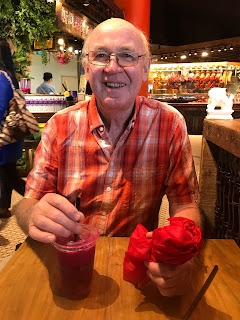 But I got beautiful jet earrings from Whitby (thank you Pete!) and lots of cheering messages on Facebook.  And I spent the day gently pootling around…well not really.  We WERE going to pootle gently but after our trip to Vivo to get my (now redundant) computer charger, we realised we could easily walk across to Sentosa.  And then maybe go to see a movie.  Except there wasn’t one we wanted to see – mostly they were showing action movies in Mandarin.


So – by then our jetlagged brains were slowly melting in the midday sun – we bought tickets to a 4D Mystery Island Adventure thingy, starring a man with enormous muscles and a very ancient but exuberant Michael Caine.


which didn’t start until 2pm…so we walked and walked some more, along some lovely pathways through what is left of the original Sentosa jungle. 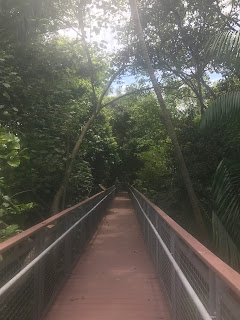 Mostly Sentosa is totally fake but they have left little pockets of lush greenery.


On our way back – my iPhone tells me we walked 15.5 kilometres yesterday – we stopped for an ablutions break at a big fancy resort hotel.  Where they had amazing sculptures!


And a beautiful toilet facility – thank you Crockfords Tower Hotel!

Pete wanted to go into town to a fancy restaurant and maybe another attempt at a movie but I said I would much rather go to the lovely basic yum cha place right next door to our Santa Grand Hotel, and be waited on by cheery Wee Yee.  (Well…I am another whole year older than I was the day before and maybe my energy levels are declining!)


We are staying in the middle of Chinatown the Santa Grand, a converted old opera house.  It is still very grand, red and black and dramatic, but…we can afford it because they have carved up the rooms into narrow long high boxes! 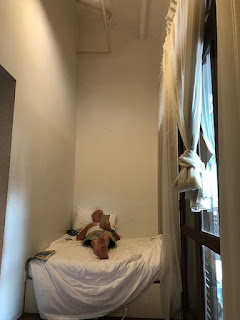 But…we have a balcony!


And a durian stall right below our balcony…oh yucky stinky durian! 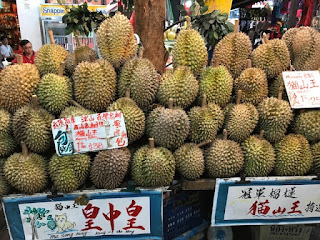 But I do love it and would stay here again, even though the TV is a mile away from the pillow end of the bed… 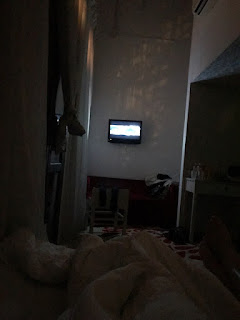 Today we have only walked 9 kilometres.  Will write about this tomorrow if the spirit moves me…
Posted by Marguerite at 02:35 No comments: